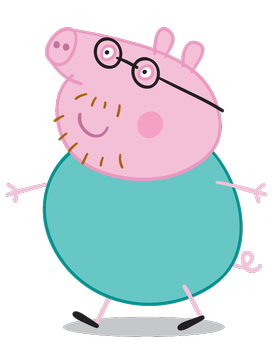 So Aussie dads are getting “woke”. Well, according to an article on the ABC website, they are.

By “woke” the ABC means dads who are finally, finally taking their useless Daddy Pig-ness off to market to be slaughtered.   And they’re coming back all cleaned up, ready to push prams, take parental leave and do the housework.

The article says that Aussie dads are starting to realise that sitting on the couch slobbing out on the weekends is a thing of the past.  And of course we’re well behind those lovely, yet gloomy Scandanavians who are woke in that IKEA way we all recognise.

You can read the full article here.

The gist of it is pretty fair, and it places much of the blame on the lack of “wokeness” in Australia on the workplace.  The writer, Kristine Ziwica, who having only been back in Australia seven years, still has the clear window of the newcomer who can see the cultural blindspots.  She observes:

Australian men, for example, are twice as likely to have their requests for flexible work turned down, only two in 100 employers set targets for men’s engagement in flexible work, and, as those now campaigning for parental leave equality point out, Australia has some of the most uneven parental leave arrangements in favour of mums in the world.

That’s problematic. Maybe our dads have wanted to be woke.  But in order to stay you know, actually awake, at work, they have had to compromise on how woke they are.

So far so good.  Hey I even took several years off work and looked after our young daughter, and I’m a housework freak to the point of distraction. And my wife and I for many years compiled one full time job between us.   Besides, if something needs done in our house whoever is there does it. There’s no “waiting” until the other one comes home.

But let me push back on the ABC.  Because from my experience of Christian community over the years, the men have been far more awake to this for far longer than their pagan counterparts.   And I want to pay homage to all those godly Dads who haven’t been waiting for a “woke” moment to serve their families in a costly way like this.

Indeed, among the churches I have been involved with, dads are onto this topic a lot of the time.  And the level of shared work in the “unpaid” and “at home” sector among Christian men appears to be far higher than among the non-church types I know.  And that’s a great advertisement for the gospel, and gospel community right there.

Why is this?  Why, when this article came out, did I get a bunch of Christian men send me a link to it? Men who just do the stuff that needs done at home.  Men who always pitch in with the kids and curtail their work roles, all without having to be woke about it, or indeed tell everyone about it?

Firstly, it’s based on what we believe about marriage.  Why is it that so many of our marriage sermons are based around that verse in Ephesians 5: “Husbands love your wives as Christ loved the church.”?

Because foundational to Christian marriage is the concept of the husband serving his wife in a sacrificial manner! The first hurdle that secular, modernist marriage has to leap in order to get the Daddy Pig out of many men is the notion that marriage is about self-fulfilment.

All that the culture is left with is “Husbands love your wives as.. FILL IN THE BLANK” – and that “BLANK” can be anything from “as long as you feel you want to” to “as long as you think she’s hot”.  When marriage is about finding the right sexual partner and being fulfilled, then “woke” is going to be a passing phase.

That is the default of modern, Christless marriage.  While not every Christian man is going to obey Ephesians 5, if he’s living in community with other Christians who are, he’s going to be challenged by that.  And if he’s not being challenged by that, then it’s not much of a Christian community.  I’ve been so encouraged in our church how the men challenge the selfishness in each other, and call each other to love and serve their wives, and indeed point out instances where they see each other failing to do that.

Second, we’ve already been awakened – by Christ.  Ephesians 5 again: “Awake oh sleeper, rise from the dead, and Christ will shine on you.”  Compared to how awake you are when Christ awakens you, you’re only ever going to be ‘half-woke.”  Christ’s awakens us away from sin and selfishness, and towards godliness and other-person-centredness.  And only his power can do that fully.

Once again, my experience of Christian men in community is that they are, by and large, concerned to put their wives first, to raise their children to be godly, and most of all to model sobriety and good judgement to their families.

Most of all, by and large they don’t come home after work and slob on the couch.  And they also have a group of other men who encourage them away from workaholism, or selfish versions of letting off steam.

Third, the level of transparency among Christian men is traditionally higher than that among those outside the church.  Where else do men call out the sin in other men while showing them great affection at the same time?

When we first planted Providence Church, we established a culture of mutual accountability among the men, in areas of sacrifice, purity, selflessness etc.  It became the new-normal.  And that’s because it’s the gospel-normal.  And that’s not just true of the white-collar “ready to be woke” city crowd, I see that same desire in the blue-collar blokes who work on building sites.

Why is this transparency so apparent? Well we recognise that there is an authority greater than us.  We don’t get to determine our own values framework or come up with a lifestyle “that suits us”, or a way of doing marriage that we want.  What other community of men can claim that?

The fourth thing is grace.  You can’t shame someone into “wokeness”.  If you do it won’t last and it will only be surface anyway.  In the end we do what we want.  And unless we want to serve sacrificially, and unless we have a compelling enough reason for doing so that promises us we will never lose out if we do, then we will find ways to do what we want.

It’s not woke to stay at home and look after your kids and do the housework share that you should be doing, if that’s what you want to do.  That’s just all life-style choice.  In fact it was for me and my wife too.  I liked staying at home looking after our daughter and running the house.  I still like doing that stuff.  It is an untested strength.

The fifth thing is that Jesus is returning and is going to call us to account.  That is stupid if untrue, and astonishing and important if true.  The reality of the return of Jesus has to change how I serve my family, and reminds me that I am not truly losing anything if I give up time, career opportunities, leisure pursuits, etc, for the sake of a greater joy.

I think we will find on that day of judgement that as family men Jesus will put more store on how we ministered to our primary congregation – our families – than any other ministry work we could have done.  There will be some dismay for those who have established a big name for themselves in either secular or ministry work, to the neglect of serving their families well.

So ABC, I think it’s a great thing if Dads are a bit more woke, but to be honest, from my experience at church over the past couple of decades, you’re way behind the eight ball when it comes to Dads being awake to sacrificially taking a load.

And if  – mums – that’s not your experience of the men in your church, and if those men who are selfish or given over to their “kidult” activities, do so with no church censure, then something is seriously wrong.  And you can forget that new patriarchy nonsense. If your church is focussing on that, then it’s not focussing on Jesus.

The gospel doesn’t let Daddy Pig wallow in the mud. It wakens him from his slumber.  And that means we’re well ahead of the “woke” curve.